Recent weed-related articles in the media

Jane Kramer writes about her foraging adventures in Europe in The New Yorker article The Food at Our Feet.  On the New York Times blog City Room, they have a series in Urban Foraging by Ava Chin, writing about purslane picked from the sidewalks of the city, and much more.

Ecologists have started to argue scientifically about if alien species are necessarily bad or not. It started with an article in Nature (subscription only, so no link, but find it by googling 'doi:10.1038/474153a') by Mark Davis and 18 other ecologists.  This led to a bumper crop of protest letters from many other ecologists (see the issues afterwards in Nature), and it entered the popular media too.  Here is a podcast from Radio Australia about it.

In an article in TIME magazine, Bryan Walsh ponders if 'In a Globalized World, Are Invasive Species a Thing of the Past?'

Wired adds to the pile, with 'Sometimes Invasive Species are Good'. Wired goes on to describe 9 invasive species worth admiring, including the dandelion weed.
Posted by LS at 10:32 PM 0 comments 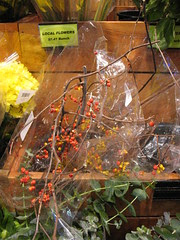 Local Flowers for $7.41 per branch!, a photo by Vilseskogen on Flickr.
The only problem here is that the local flowers are the invasive species Oriental bittersweet, Celastrus orbiculatus, which we rather get rid of. I bet the florist didn't know this. But this is a great use for an alien, invasive weed, don't you think? And to have some people pay over $7 for a branch of unwanted stuff, that is pretty good too. Of course most of them could have gone to any nearby place and cut this down themselves, since this species is omnipresent, fortunately.
Posted by LS at 8:51 PM 0 comments 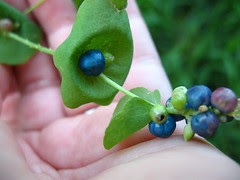 Mile-a-Minute weed, Polygonum perfoliatum / Persicaria perfoliata, Polygonaceae, a photo by Vilseskogen on Flickr.
This plant is a horrible invader, grows nearly as fast as its name indicates. But the blue berries are pretty. Probably eaten by birds, I would think. The stems have these sharp hooks on them, which helps the plant to climb up. It is in the same family as rhubarb, smartweed, and buckwheat, the Polygonaceae.
(Polygonum perfoliatum = Persicaria perfoliata, Polygonaceae)
Posted by LS at 10:11 AM 0 comments

What agriculture really is about...