Spraying against weeds with Round-Up 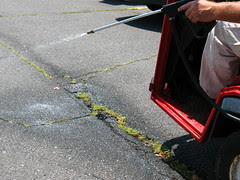 Spraying against weeds with Round-Up, a photo by Vilseskogen on Flickr.
On a Rutgers parking lot, I caught this scene a few weeks ago. I wonder, why do we really have to kill these poor little carpetweeds and other weeds? It is not like the car tires will slip on them, right? It is all because we think green on the black will look bad? Look untended and dirty?
Posted by LS at 3:14 PM 0 comments Yes, in England.  Fentiman's produces a soda made with dandelion leaves (Taraxacum) and burdock roots (Arctium). It is apparently a traditional English favorite.  I will have to ask my UK friends about this.

They also have Ginger Beer that includes yarrow (Achillea) and their Orange Soda has speedwell (Veronica) in it.  Gloriously weedy, indeed.
Posted by LS at 1:54 PM 0 comments

A weed killer is banned

"The Environmental Protection Agency banned the sale on Thursday of Imprelis, a weed killer introduced this year that landscapers link to thousands of tree deaths around the country."  (source: New York Times, August 11, 2011)
Another pesticide is banned from lawns and turf areas after killing of the trees nearby.


"While it has been highly effective at killing clover and broad-leafed weeds like dandelions, landscapers say, nearby evergreens in many cases began dying within weeks of the first applications. Some agricultural experts have suggested that the tree toll could reach into the hundreds of thousands."
Imagine how much it would cost to replace (which you really can't) a big old spruce or douglas fir.  In the article they say up to $25,000.  Wouldn't you rather have some dandelions and clovers AND your tree alive?  I just don't get the need people have to have a weed-free lawn, a rather sterile environment just of spiky grass leaves.  Certainly, our pursuit of neatness and control in our gardens brings us more and more toxins and deaths.

Now I wonder how many of the dead conifers you see around here in New Jersey after last summer's drought might have been from landscapers spraying Imprelis on the ground around them.
Posted by LS at 12:24 PM 0 comments 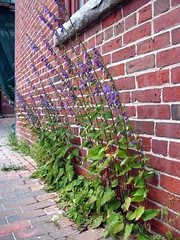 Urban weed: Campanula rapunculoides, a photo by Vilseskogen on Flickr.
A very crowded place to live for a weed, between a brick and a brick, in Portland, Maine.
Posted by LS at 10:21 PM 0 comments

A good garden may have some weeds.

The book WEEDS: in Defense of Nature’s Most Unloved Plants by Richard Mabey is reviewed in New York Times today.  It is great review, but once again there is a common mistake in how evolution works by the writer of the review (and maybe also by Mabey, I am not sure since I haven't read the book yet):
"One can’t help being impressed by weeds’ ingenuity. They’ve grown hooks, burrs, spines, rib hairs and a sort of glue to move their seeds around."
Weeds haven't grown these things.  Plants that had these characters, evolved from genetic variation and mutations over a long time, became weeds because of them.  To become a weed is a secondary thing, not something that forces a plant in a certain evolutionary direction.
It is interesting though how our weed project hits exactly the same notes as Mabey's book.  History, culture, biology, medicine, and the misunderstood weeds connecting it all.
Posted by LS at 9:15 AM 0 comments