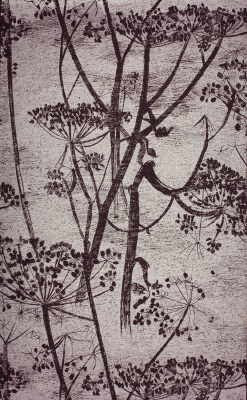 Cow parsley is a weed of Europe, and much loved (at least in Sweden) for its detailed, airy white flower heads in early June. By late fall the fruits are still standing on the dry stalks and they often last partly through the winter.

It is in the same family as the American Queen Anne's lace (Daucus carota), which is the same species as carrot.

The interior design company Vanillawood in Portland, Oregon, USA, made a wallpaper featuring this species.  It comes in many colors, take a look here. Lovely pattern!

I don't know how or why this company settled on this species, but cow parsley is becoming an invasive weed here in the US. It is classified as a "Class B noxious weed" in Washington State, USA, and is widespread as an invasive weed both in both northwestern and northeastern USA.  It is mostly called wild chervil in the US.

It is a bit disturbing that a lovely wildflower plant you remember from your childhood and that you strongly associate with long Swedish summer nights are suddenly horrible weeds in another country.  The same thing happened to purple loosestrife, which was one of my favorite flowers on the Baltic seashores.  Here in the US it also is a horrible invasive species.